The WHO teaches that prevention means everything: the case of schistosomiasis.

Recently, scrolling my Facebook wall, I found a post published by World Health Organization (WHO) about schistosomiasis. I didn’t know what it was, so I decided to learn more about the subject. Schistosomiasis, also known as snail fever or bilharzia, is an acute and chronic disease caused by parasitic worms of the genus Schistosoma. These parasites proliferate in fresh water, where their eggs hatch, and use a specific type of freshwater snail as vehicle to reproduce. People exposed to infested water get contaminated because parasites at larval stage can penetrate the skin. They subsequently become infective agents when their excreta – which contain parasite eggs – contaminate fresh water.

In the human body, adult worms live in the blood vessels, where females release eggs. Some eggs are excreted into feces and urine, others stay trapped in the body. This causes immune reactions and damage to organs. After the first contact with the parasite, general symptoms are dermatitis and Katayama fever (characterized by fever, lethargy, skin rash, liver and spleen enlargement and bronchospasm). Symptoms of long-term schistosomiasis are due to the reaction of the body to the eggs’ presence, therefore the disease is classified on the basis of the organ infected. Intestinal schistosomiasis is characterized by abdominal pain, diarrhea and blood in the stool; urogenital schistosomiasis’ main feature is blood in urine, with several kind of damages to genital organs and resulting in infertility.

Schistosomiasis is common in tropical countries in Africa, the Caribbean, eastern South America, Southeast Asia, and the Middle East. In 2010, approximately 238 million people were infected with schistosomiasis, 85% of whom live in Africa. It is difficult to track the number of death related to schistosomiasis: in early 2000s it was attested to be around 200000/year, while in 2015 WHO reports a total number of 24067 deaths. This massive reduction is due to the intensive prevention operated by WHO in countries where the disease is endemic, as we will see in the next paragraph. The control of schistosomiasis is based on large-scale treatment of at-risk population groups, access to safe water, improved sanitation, hygiene education, and snail control.

To fight the disease, the WHO chose the strategy of preventive chemotherapy based on praziquantel administration to target groups. These groups include entire communities living in highly endemic areas, school-aged children and adults-at-risk in endemic areas, and everyone who works in contact with infested water (i.e.: fishermen, farmers). In total, preventive chemotherapy for schistosomiasis is required in 52 countries for a total of 219.9 million people: 120.3 million school-aged children and 99.6 million adults. In this way, WHO aims to reduce morbidity (number of disease events within a population) and transmission of schistosomiasis. Indeed, the preventive chemotherapy cures the initial symptoms and prevents the disease to become chronic.

The success of this strategy is paramount, as the aforementioned drop of schistosomiasis-related deaths shows. In 2017, almost 98.7 million people (81.8 million school-aged children and 16.9 million adults) were treated for schistosomiasis worldwide (88% in Africa). Dr. Amadou Garba-Djirmay, Medical Officer who heads the global schistosomiasis elimination programme, says: “The global treatment for school-aged children increased from 53.7% in 2016 to 68.0% in 2017, which very close to reaching the target of 75%.” Unfortunately, results for adults is not as good as for children, as Dr. Garba-Djirmay explains: “The overall treatment for adults has remained low; the main reason is the unavailability of the medicine (praziquantel) for all age groups.”

The graph below is taken from WHO 2018 report (indicated in the references) and it indicates the increase of people who underwent preventive chemotherapy against schistosomiasis, with the percentage of children treated with praziquantel that increased from less than 10% in 2006 to almost 70% in 2017. 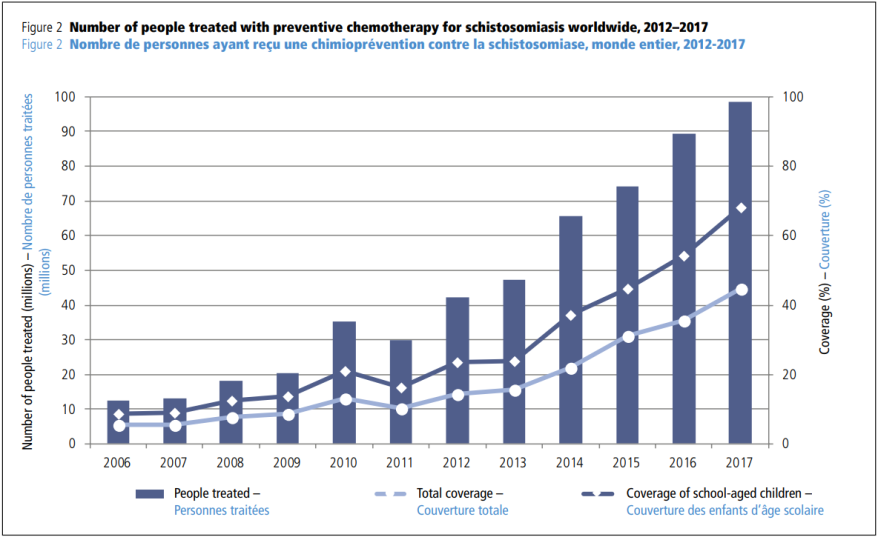 I am an Italian scientist and my field of expertise is cancer research. The majority of my posts belong to popular science field, because I aim to spread science to make it a more accessible and understandable discipline for everyone. Because I like to travel, my blog contains also tourism-related posts. View all posts by Davide Berta

You can make a donation if you would like to support my work. Puoi fare una donazione se vuoi sostenere il mio lavoro.