When Music and Science meet: from music therapy to robot artists

After describing here the centuries-long interaction between science and art, in this article I present the connection between music and science. While art is a powerful tool of popular science, music is science. Indeed, pitches, rhythms and tempos are the mathematical ingredients that creativity mixes to produce a variety of sounds and musical arrangements.

A definition for music

It is impossible to find a definition of music that satisfies everyone, for different reasons: in practice, because of divergent ideas of its nature and values; more philosophically, because it’s impossible to squeeze such complicated phenomenon into a sentence. According to the current common sense, we could define it as “humanly organized sounds and silences”, but such information is not sufficient, because also the ticking of a clock follows the described pattern. Even if we modify the definition adding some “musical” feature, we would fail because, for example, a typical lullaby sung by Zuñi Indians has nothing to do with harmony that we are used to. Now you are thinking that it evokes emotions, aren’t you? A crying child in pain does it as well, but it’s not music. Moreover not all musics, and not only music, evoke emotions.

Do you think you found a perfect definition? Shoot it out!

How do we hear music?

Let’s break the magic. To be perceived, soundwaves (of music or any other noise) need to reach the brain. Through the outer ear, they get to the eardrum, which vibrates. Vibration is then transmitted to the middle ear, where it’s amplified, and then to the cochlea, a snail-shaped structure filled with fluid, in the inner ear. This organ is rich in hair cell, so called because on their surface there are tiny hair, known as stereocilia. Vibrations cause the fluid inside the cochlea to ripple, which is turn make the stereocilia bend. This movement generates an electric signal that is carried to the brain by the auditory nerve. Finally, the brain converts the signal into the sounds that we know and is also able to discriminate between relevant sound and background noise.

What happens when we listen to a song we like? A region of the brain called nucleus accumbens gets stimulated. Moreover, when different people listen to the same music, their brain acts in a similar way: the same type of interactions among different areas of the brain are observed. So why people like different kinds of music? It is conceived that, because of personal experiences and social background, such brain activity occurs at different levels in different people, and this determines such variety.

To be fair, what happens instead when we listen to a song we dislike? Beyond the annoying feeling, scientific evidence displayed negative effects on the brain, such as the impairment of spatial rotation (which is the ability to rotate 2-dimensional object in the mind). So if you dislike a song, you better skip it fast!

We all know that music has an impact on our feelings and can stimulate emotions. Maybe not everyone knows that, because of this, it is successfully exploited in medicine.

After exposure to a stressful situation, listening to classical or self-selected relaxing music results in reduced anxiety and anger. How does it happen? Music improves blood flow in the brain and lowers the level of stress-related hormones (like cortisol). Thanks to its relaxing effect, it reduces anxiety of medical patients and it is considered a viable alternative to sedatives and anti-anxiety drugs for reducing preoperative stress.

The effect of music listening on mental health has applications in psychotherapy. In fact, it is important for the interaction between patient and therapist, to establish and maintain a connection.

Usually, slow tempos, gradual chord progressions and drawn-out notes are associated with relaxation, but it’s not a rule, as there are people who find relaxing AC/DC. I’ll spend few words about heavy metal because it is an interesting topic. Due to its extreme sound and aggressive lyrics, it is controversial. In a study, non-fans listened to classical music, heavy metal or sat in silence after undergoing a stressful situation. In all conditions but heavy metal, people showed a decrease in anxiety. Heavy metal fans tend to be more open towards new experiences, preferring an intense, complex and unconventional music, together with a negative attitude towards institutions. So, heavy metal could have a cathartic effect on its fans, rather than raising bad feelings. According to the famous psychologist Robert Cialdini, listening to heavy metal promotes scientific thinking and students could benefit from it. As it is associated with problematic behaviour, it contributes to bring mystery in classrooms, and it could be exploited together with other elements of pop culture that stimulate scientific thinking, such as film, videogames and comic books.

Benefits of music are not limited to relaxation, but have an impact on health and wellbeing in general. Music therapy can be receptive (if it requires listening) or active (if the patient is engaged in music-making).

Long-term music training determines neuroplastic changes in both children and adults, and because of this, it is exploited for rehabilitation, for example on patients with stroke. Patients that are encouraged to play a melody on the piano or on electronic drum pads with the paretic hand recover motor agility faster and establish better connection between sensorimotor and auditory regions in the brain. Music therapy seems to improve memory in patients with Alzheimer disease, even though results are inconsistent due to limited trials, and in recovering from drug addiction, as it allows to experience emotions without the need for substance use.

Music is a perfect medicine, because it is ubiquitous and available whenever needed. Moreover, it is possible to find the right music for every moment or need, like a sort of precision medicine.

In my blog I write only about hard sciences (biology, medicine, genetics, technology and so on), but this topic deserves a paragraph also about soft sciences. Music has not only an effect on the individual that listens to it, because it creates bonds too. It’s a bridge among cultures and languages. Popular songs, national anthems, war marches are all examples of how it can make people feel unite. Music is common denominator throughout history, for all populations. Here are a couple of less-known examples that prove its identitary effect. In Uganda, during the emergency of HIV epidemics, music is used to revitalize the hope and health of people by maintaining individual and collective identities. Beleganjur music plays a pivotal role for Hindu-Balinese people during processions linked to mortuary rituals. 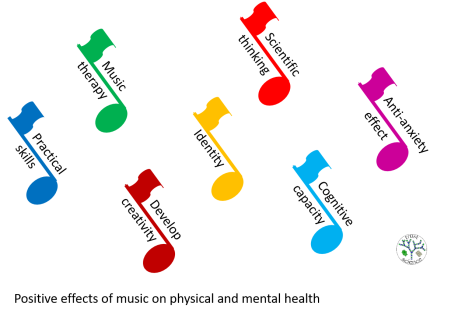 Can science make the perfect song?

Of course it can! Science can create the perfect song for any occasion. Professor Kostas Karageorghis developed “in the lab” a song named Run With Me, aimed to improve runner performances. He focused on a few key areas: the beats per minute (bpm), lyrics and rhythm. Research found that this track can boost a runner’s mood by 15%, when compared to running in silence. Click the link and listen to it. Now don’t you feel like wearing your sneakers and test it yourself? Professor Karageorghis explained to Cosmopolitan why tempo is important: “At a low-to-high intensity of running, there’s a sweet spot of tempo which is between 120 and 140 bpm. Given that in a race scenario, people will be running relatively hard because they’ll be striving to achieve personal bests, we went for the upper range, from 130 to 140 bpm.” Lyrics include: “Run with me, see the world beneath our feet and know I will always be there. The sun is rising over the valleys of our utopia” and “It’s only you, like a hurricane running through my veins”, which gives a positive imagine to the runner that boosts the physical endeavour.

The truth is that technology, through artificial intelligence (AI), plays with music more than you think. The principle of artificial intelligence is simple: you train a machine in something, and then the machine will work independently and better than you. AI works with success in several fields, such as medical diagnostics, fake news filtering and much more. Robots can exploit algorithms to make songs, like Yona. “She” was produced by Auxuman, a company that creates AI-based characters and licenses them for entertainment, branding or live performances. Yona has 4 siblings: Mony, Zoya, Hexe and Gemini, all with different personalities (!). Personally, I am not enthusiastic about the songs of these SIMS-like characters, but I am just an amateur guitarist with (I guess) no right to blame heavily-instructed robots.

French composer Benoît Carré, when working with Sony researchers, fed a system called FlowMachines 470 lead sheets of Jazz standards from 1930s up through the 1960s. The final result was the AI-generated song, released in 2016: “The Ballad of the Shadow”.

Artificial Intelligence is also exploited to understand people preferences. The “skipping profile” (the list of all the times we skip a song) on streaming services not only helps in offering to the customer songs that fits better his/her taste, but also analyzes song patterns that are liked the most by people in general.

Not always science and people’s opinions ride on the same rail, but they agree at least about the favourite song: according to both scientific analysis and music enthusiasts, “Africa” by Toto is the best song ever made. Do you agree too?

Scientists with the passion for music

Do you think scientists are boring nerds in lab coats? Here are some world-famous musicians that have also been scientists:

The man who makes music out of science

Mark Ballora is an expert of music technology at Pennsylvania State University in State College that uses sonification to create symphonies out of scientific data. In the past 20 years, he collaborated with scientists to make music out of scientific discoveries, from the energy emitted by a neutron star to the body temperature cycle of arctic squirrels. How does he do that? First he meets the scientist and learns about his/her work, then he thinks of what sound could fit the data. Why is he doing that? In a recent interview published on Science in 2017, he explained: “It’s like when you add soundtrack to a movie: It takes you into that world and it makes it a much more visceral phenomenon. It shouldn’t be an unusual thing for us to listen to data. I think we should try to put educational programs together so that young people grow up considering science to be something that you listen to as well as something you look at. As humans, we all respond to music: If we can leverage that with science, there’s a real chance of giving students a much more intuitive understanding of the material than they would get from a visual presentation alone.”

In another blog I read a sentence that I liked and I want to share with you: “Science is the music of the intellect, and Music is the science of the heart”.

I am an Italian scientist and my field of expertise is cancer research. The majority of my posts belong to popular science field, because I aim to spread science to make it a more accessible and understandable discipline for everyone. Because I like to travel, my blog contains also tourism-related posts. View all posts by Davide Berta

You can make a donation if you would like to support my work. Puoi fare una donazione se vuoi sostenere il mio lavoro.